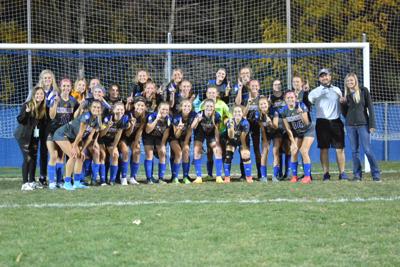 The Roughriders left no doubt.

After settling for a 2-2 tie earlier this season against Ottawa-Glandorf, St. Marys coach Nick Wilson said despite that tie, everything was still in front of his team in regards to winning the Western Buckeye League title for the second time in three years.

On Tuesday, that statement came to fruition.

The Girls of Fall never lost another league contest — taking down state-ranked Bath and upending rival Celina to put them in position to capture the league with a win on Tuesday.

And without a doubt, they got that win and that league title.

Behind senior Lilly Ankerman and her four goals and a constant offensive attack all night long, the Roughriders left no doubt with a resounding 9-0 WBL win against Defiance, crowning the Roughriders league champions for the fourth time in program history.

To read the full story about the Roughriders winning the Western Buckeye League title, grab a copy of Wednesday's print edition of The Evening Leader.