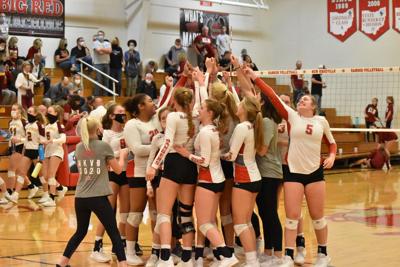 NEW KNOXVILLE — Out of the 199 Ohio Division IV volleyball teams, the top two ranked teams are not only in the same county and the same conference but sit a mere six miles apart — creating quite the neighborhood rivalry.

In a thrilling match at The Barn, the No. 2 New Knoxville Rangers defeated No. 1 New Bremen in straight sets on Tuesday night, 25-22, 26-24, 25-22 in Midwest Athletic Conference action.

The win gives New Knoxville a share of the MAC title, its first since 2005 as The Little City now sits atop of the MAC standings. A win against Marion Local on Thursday would give the Rangers its first outright conference title in program history.

“My adrenaline is high. I'm excited and I'm proud of our girls,” said Rangers coach Meg Lageman. “I told them to celebrate this because they deserve to. I'm very proud of them. We still got another big, big game on Thursday so we got to keep that in our focus starting tomorrow, but tonight we're going to celebrate and enjoy the win because it was a good one.”