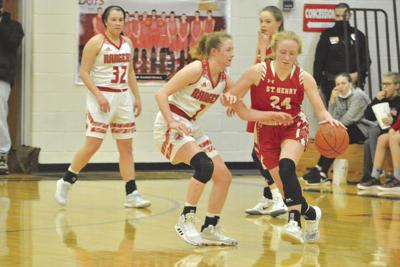 Then the Rangers held them to seven points after that.

Courtesy of an 8-0 run to conclude the first quarter and bolstered by a 12-2 outscoring to end the first half, New Knoxville is now on the cusp of its third straight district tournament berth after coming away with a 52-9 victory in girls basketball action.

The Rangers (19-4) will host Upper Scioto Valley (2-17) for a sectional championship on Saturday at New Knoxville. The game, originally scheduled for 7 p.m., has been moved up to 1 p.m.

To read the rest of the Rangers' tournament win against St. Henry, grab a copy of Friday's print edition of The Evening Leader.