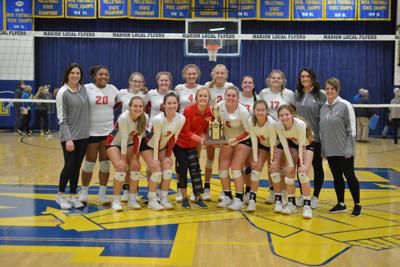 Back in August, Rangers coach Meg Lageman was confident in her girls that they could win the Midwest Athletic Conference despite all of the tough schedule that was ahead of them.

And on Thursday, her girls made history.

Now only did the Rangers win the Midwest Athletic Conference after beating top-ranked New Bremen on Tuesday, the Rangers made sure not to share that distinction with anyone else.

With just dropping one set on the entire MAC season, New Knoxville culminated their domination of the most dominating volleyball conferences in the state with a 25-19, 25-21, 23-25, 25-20 win against Marion Local on Thursday.