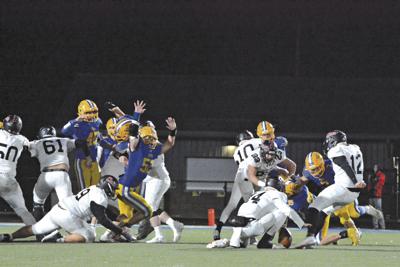 Ross Henschen made the right call.

The junior was playing in his second game back after recovering from a knee scope and being out since Week 2 — while hard to watch his teammates compete from the sidelines — the fullback wanted to be 100% for when instances such as Friday occur.

Deadlocked in a scoreless tie, Henschen — 100% knee and all — took the ball around the left tackle and scored on a 14-yard run for the game-winning touchdown in overtime to propel the Roughriders to another week of football in a 6-0 victory against Franklin at Grand Lake Health System Field.

“I came back and I proved myself. I am just so proud of my team.”

To read the full story on the Roughriders' playoff overtime win, see Saturday's print edition of The Evening Leader.