Starting at
$0.99 for 1 day
Get Started
View all rates
You are the owner of this article.
Edit Article Add New Article
You have permission to edit this article.
Edit
Home
News
Sports
Entertainment
Obituaries
Photos
Videos
e-Edition
Classifieds
Subscribe
Share This 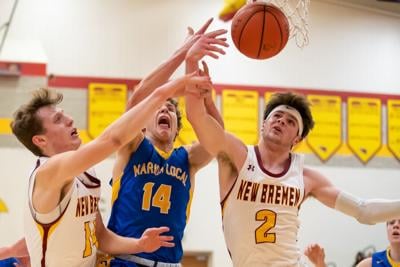 But New Bremen did just that on Friday night, defeating Marion Local 63-55 in a thrilling overtime game to earn their third sectional title in four years.

Marion Local led by as many as nine in the second quarter and held an eight-point lead late in the fourth.

Immediately after, his brother Dan Homan, forced a steal near half court and David scooped it up and drove to the hoop for another two points, Cardinals trailed by two.

Junior Reece Busse picked his fifth foul with just over a minute left.

Marion Local’s Alex Eyink made two free throws and the Flyers were back up by four.

Mitchell Hays then took it the length of the floor for two to make it 45-43.

To read the full story, pick up a copy of Saturday's, Feb. 27 edition of The Evening Leader or become an online subscriber today.